Of all the Czech artists, who have managed to forge a successful career abroad, Miloš Forman is probably the most remarkable one. Forman has worked as a film director for many years and stands behind a few most recognized films of the twentieth century, such as One Flew Over the Cuckoo’s Nest from 1975 and Amadeus from 1984.

Life story and career
Forman was born in 1932. He left his home country in 1968 when it became clear that the Soviets were about to resume their previous control over Czechoslovakia. Forman studied screenwriting in Prague and made multiple successful Czech films before his arrival to the USA. As for his personal life, Forman was married three times and had four sons. He died after a brief illness in April this year at the age of 86.
For his directing work, Forman received worldwide recognition and various prizes. Most notably, he won the Academy Award for Best Director two times – for the already above mentioned films, One Flew Over the Cuckoo’s Nest and Amadeus. One Flew Over the Cuckoo’s Nest has also joined the short list of films which won Academy Awards in the five main categories (best film, best actor in leading role, best actress in leading role, best director and best screenplay). Amadeus did even better and won eight Academy Awards. 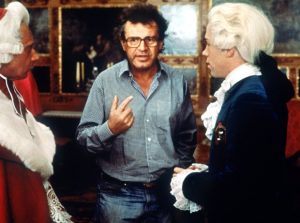 Forman worked on multiple films, both in Czechoslovakia and in the United States. His film Loves of a Blonde (1965) belongs to the recognized Czechoslovakian New Wave. His subsequent Czechoslovakian film The Firemen’s Ball (1967) even further cemented Forman’s reputation as an unique creator with a specific film style and sense of irony.
During his career, Forman has worked with many well-known actors and actresses, such as Jack Nicholson, Colin Firth in Valmont (1989), Jim Carrey in Man on the Moon (1999), Natalie Portman in Forman’s latest big film Goya’s Ghosts (2006) and many, many more. Forman has made a true impact on the film’s history and his work will continue to be watched, talked about and applauded by many film fans all around the world.