There are many beautiful places in the Czech Republic. However, the most popular city amongst the countless number of tourists visiting the country is Prague – which also happens to be the capital of the Czech Republic. The city has a rich and colorful history and offers many interesting landmarks to see.

Brief history and important details.
Prague was founded in the 7th century. Its name is derived from a Slavic word práh (ford or threshold). It grew over the course of history and is now a home to more than a million people. It held the position of a most important culture, economical and political centre in Europe multiple times throughout history and it still is one of the most recognized and popular cities visited by thousands of tourists each year coming from all over the world. 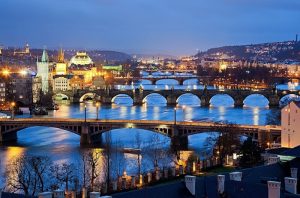 Prague has many places worth visiting. Cultural lovers are certain to appreciate the National Theatre with its beautiful architecture or Rudolfinum where Czech Philharmonic Orchestra resides. There are many museums in the city, for example the National Museum or the Jewish Museum. The city is especially lively in summer when it hosts multiple events and festivals.

Prague is very popular because of its architecture. Many buildings in the city have barely changed over the years and its long history makes the city attractive to foreigners. Prague still has a lot of older buildings intact and it therefore often plays a significant part in historical films. Films of all genres have been filmed in Prague, for example Amadeus, Chronicles of Narnia and Van Helsing, to name just a few.